Since 1970 our president, Mr. Tjong Kok Poo, has been dealing in the textile and garment industry especially among the Japanese society as the main foreign investors in Indonesia. That was how he was recognized and later in 1987 was appointed to become Tajima’s sole distributor in Indonesia under his “Gunung Mas” company, which means Golden Mountain.

In the early of 1990’s when the embroidery business was at peak, Gunung Mas successfully transformed Tajima brand from a poor-service image into a strong and trustworthy after-sales-service entity. Tajima regained the market’s awareness as the most prestigious brand in Indonesia and has been enjoying fruitful results since then.

Tajima Gunung Mas headquarter is situated in the heart of Jakarta, the capital and the largest city of Indonesia, where almost 60% of embroiderers are widely spread out. The head office is a 1,200 sqm building, facilitated for embroidery gallery, seminar room, parts warehouse, office space and spacious showroom which functions for private exhibition.

Besides the head office, Tajima Gunung Mas is perfected by its branches in Surabaya (the 2nd largest city in Indonesia) and Bandung (the 3rd largest city). The new Surabaya office was inaugurated in October 2003 and completed with a large showroom as well. The head office and branches provide full service such as sales, after-sales-service, parts and embroidery design center.

With more than 70 employees, Tajima Gunung Mas has a mission to become the preferred company in the embroidery industry and technology in Indonesia – which provides the most excellence and profitable solution.

Combined with full support and sincere cooperation from Tajima Industries, Gunung Mas is heartily confident to achieve the mission and to face the future competition creatively. 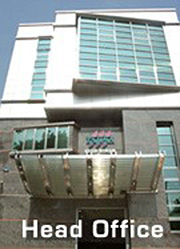